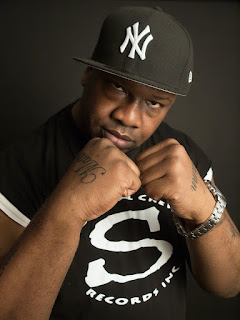 STRONG A.R.M. is the name that describes the 6'2", 200 plus pound Brooklyn native who is definitely taking on ALL HATERS! It's a perfect description of his overall attitude. This is one artist that believes anything goes when it comes to his music. He did not choose to do hardcore hip hop, hardcore hip hop chose him! It allows him to say what the hell he wants. Bringing it straight to the front line so your attention is caught and kept.Don't get STRONG A.R.M. wrong though, that is just one area of hip hop he is good at, he is versatile in all other areas as well.
STRONG A.R.M. is coming straight out of Brownsville,Brooklyn NYC! He has been going at it for years now, and he is not about to let anyone from his past, present, or future get in his way! He is self-motivated, and determined to continue until he accomplishes his dream. He has spent his entire career learning the business and perfecting his skills as an artist, writer, and producer.
After the “SUCCESS” of Strong A.R.M.’s debut project “THAT’S GANGSTA” which brought Strong A.R.M. not ONE but TWO #1’s on Starfleet Record Pool (#1 on the Indie Urban/Hip Hop/Latin Chart) & (#1 on the Urban/Hip Hop Chart), not to mention GREAT chart positions on the “Dance” and “Crossover” charts as well, and over 2,000,000 POSITIVE VOTES! Strong A.R.M. comes back at you with the next song on the same project entitled “BET’CHA DIDN’T KNOW” featuring Warren J. Gallimore. This song is a BLAST FROM THE PAST taking lyrics from the original “STRONGULATION” album and remixing it with a CRAZY HOT electronic dance tune which is what the final outcome will be for Strong A.R.M.’s NEW album entitled “STRONGULATION 2”(Da EDM Remixes)! Check out Strong A.R.M.’s new musical journey on itunes, Apple Music, Google Play, Amazon Music, Tidal, Deezer, and  other digital music stores AROUND THE WORLD! Also check out STRONGULATION RADIO on JANGO! http://www.jango.com/music/Strongulation. These 2 tracks are heating up the airwaves WORLDWIDE!
Get these tracks on iTunes!