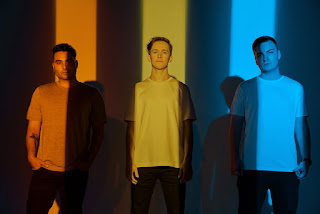 TELYKast’s new remix of their track ‘Summertime’ is the ultimate festival jam, with an upbeat and joyful vibe to it. Featured by the singer and songwriter Rachel Raquel, who has a voice that sounds like a velvety touch and a warm breeze, the song is the ultimate soundtrack to those late night road trips and chilled out evenings. The tune is inspired by Los Angeles - both its ups and downs.
“‘Summertime’ is about moving to L.A. and getting lost in the skyline. It’s easy to be swept away by the beauty of it all. The track is about the magic to it, but it’s also about the pitfalls that easily happen, and about the parts of the city life that are often forgotten when a city is heavily romanticized” TELYKast says about their new single.

Living together in a house in Los Angeles where they have rebuilt their bedrooms into professional recording studios - TELYKast is a trio literally living, sleeping and breathing music. Constantly in a creative mindstate, they create high energy pop exclusively made with organic instruments. The hyped group has sold out every live show that they’ve played, and with an iconic and innovative live setup consisting of a DJ, a guitarist, and a vocalist - the three musicians blend their various musical influences in a way that’s never been seen on the mainstage before.
“Everything in our recordings is organic and we live by the philosophy that we can create any sound without using synths. We really enjoy playing live and performing our unique mix of both DJing and playing live instruments simultaneously. With a mission to push the boundaries and shift the needle, we’re here to innovate the dance scene and change it up a bit” TELYKast says.
Consisting of Trevor who grew up in Los Angeles gigging with metal bands, Linus who grew up in Manhattan playing the jazz guitar, and Kyle from Dallas - who was inspired to start DJing when he went to Sweden and fell in love with dance music - TELYKast is a mixture of both geographical and musical backgrounds.